The Everything Bubble: Markets At A Crossroads

Bitcoin Will Not Submit To Black Swans

This is an opinion editorial by Bernardo Filipe, a life-long thinker, philosopher and author of “The Straight Science.”“Earnings-free assets with no residual value are...
Read more
Trending

Despite a recent warning from European politicians on the dangers of bitcoin, the Swiss-based bitcoin app has published record results this month.Despite a recent...
Read more
Trending

On Tuesday, Brazil’s Chamber of Deputies approved a landmark cryptocurrency legislation that sets the tone for how the country will regulate bitcoin.Key aspects of...
Read more

There are times in the life of a startup when you don’t really want or need to raise money, but an opportunity comes along that’s so good that you create a brand new round just to be able to bring in a strategic investor.

That was the situation Danish animation and motion capture company Rokoko found itself in over the summer. I wrote about its $3 million strategic round that valued the company at $80 million — a round pulled together specifically to let Zepeto buy its way onto Rokoko’s cap table.

When that sort of thing happens, you typically don’t need an in-depth deck; the investor is already pretty sure they want to invest, and you’re pretty sure you want the investor. Besides, if the deal doesn’t happen … whatevz, you didn’t need the money anyway.

When I talked with Rokoko, I found myself wondering: What were they using as a deck in this very specific circumstance? Luckily, the company’s CEO was happy to share the deck with me. So for this week’s pitch deck teardown, I’ve got something slightly unusual: a strategic extension deck!

We’re looking for more unique pitch decks to tear down, so if you want to submit your own, here’s how you can do that.

Slides in this deck

If you’re building a company in the creator space, you’d best have a beautiful deck. And oh my actual goodness does Rokoko deliver on that front. 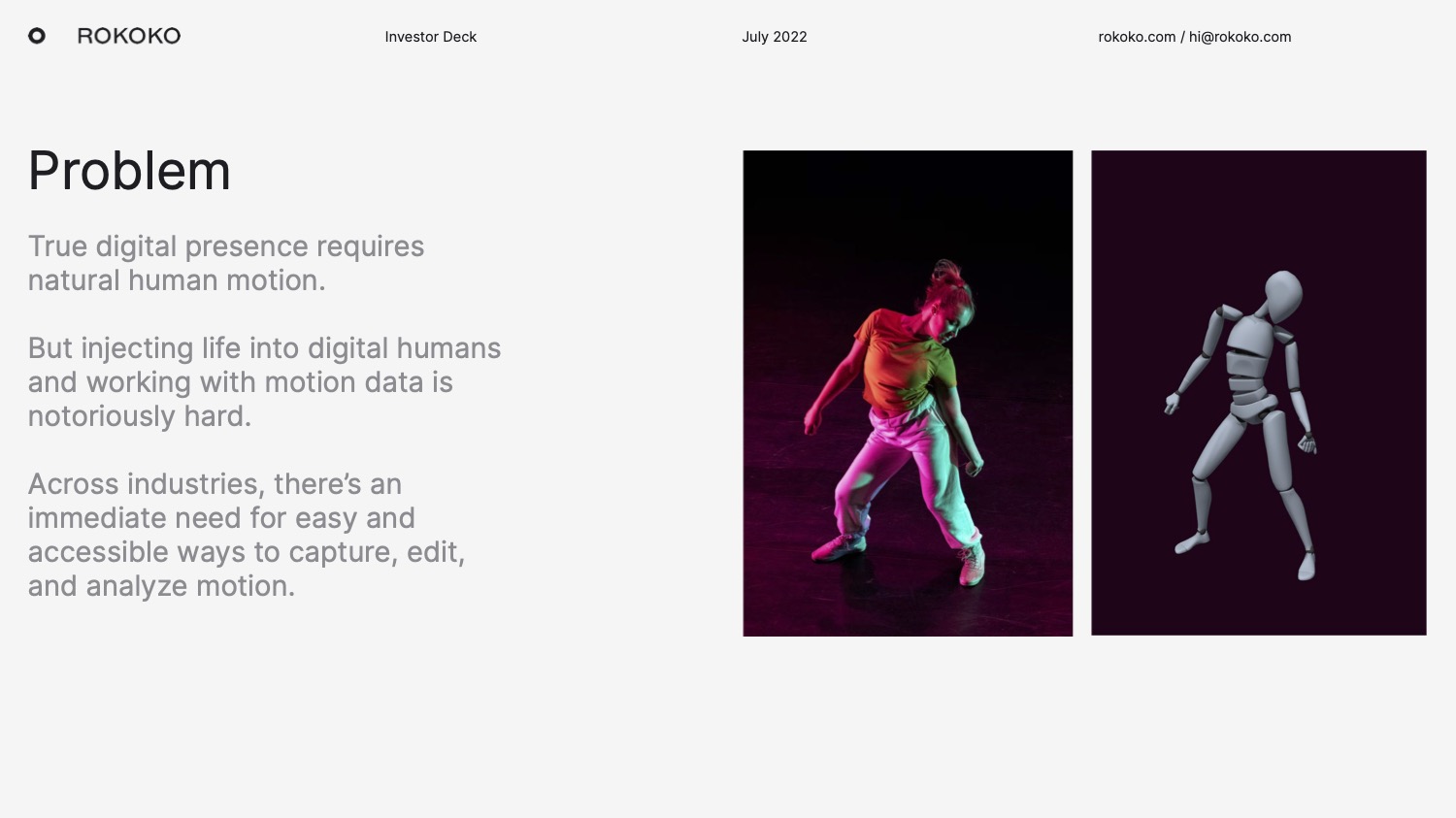 The team at Rokoko is all about motion and the capturing thereof. How the ever-loving hell do you capture that in a still-frame slide deck? Well, Slide 2 gives you the answer. This slide is an absolute masterpiece of storytelling. By contextualizing a human in motion next to a digital counterpart, Rokoko displays in a single side-by-side what it does.

The photograph is great, of course, and it evokes motion and movement. Anyone who’s ever tried animating something by hand knows how hard it is to get movement to look natural. The two images go a long way, and the text further rams home the point: We are living in a universe where a wide range of motion needs to be captured in order to make animators’ lives easier. It’s not hard to imagine that that’s true for games, animated movies, and much more. I love the simplicity of this slide and how much work it does. It’s a great way to establish the conversation.

You know all that praise I just heaped on Rokoko above? It gets better. I’m already convinced that this is a good opportunity, but then they go and tell us that there’s a huge amount of additional opportunities as well: 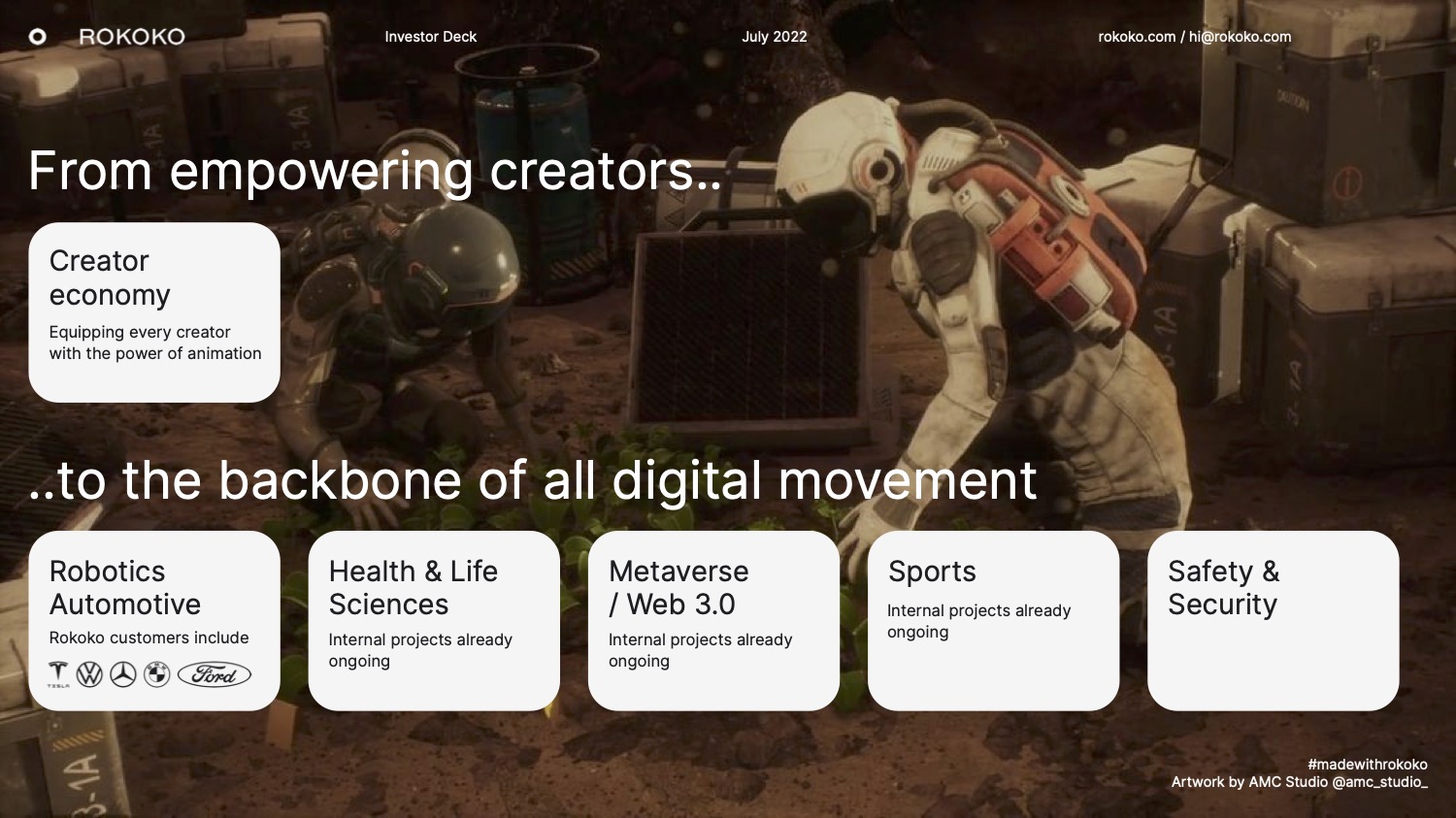 If you’re building a company in the creator space, you’d best have a beautiful deck. And oh my actual goodness does Rokoko deliver on that front.

It makes sense that creators — especially low and mid-budget games and animation producers — are a big and growing market. Seeing that Rokoko has thought about (and is executing against) a market expansion is exactly what investors want to see.

For a lot of companies, I would push back at this point, saying that this is fragmentation and lack of focus, but I really like how Rokoko tells the story in this instance: They are thinking about health and life sciences, web3, sports, and other use cases, but they’re not making a big deal out of it. It shows that they are keeping tabs on things without really diverting too many resources. At least, that’s what I’m hoping. If I were looking to invest, I’d ask them how many resources they are using, but given how this slide is designed and worded, I’m confident that they’re running some pilots/early tests.

The outlier is “Robotics and Automotive,” where the company casually drops the fact that they have Tesla, Volkswagen, BMW, Ford, and Mercedes as existing customers. That’s underplaying what’s going on, but it’s a great way to tell this part of the story. Yes, there’s a flurry of questions immediately jumping to mind: How are they using your product? What are the contracts worth? How did you get them? What can you do to grow your presence there? How can you pick up even more robotics and automotive clients? But as far as the storytelling goes, it hints at a solid core market (creators) and a plethora of potentially lucrative market extensions. It’s a great place to be as a startup.

Oh and about those creators …

The first time I clicked through Rokoko’s deck, I was confused about the ordering; I would have switched slides 4 and 5. But thinking about it more closely, I see what they are doing. Instead of doing a “this is our core and here are the other opportunities,” they are doing it the other way around. Slide 4 shows the lay of the land and then Slide 5 drills deeper at the core audiences, showing that there’s a huge growth opportunity. 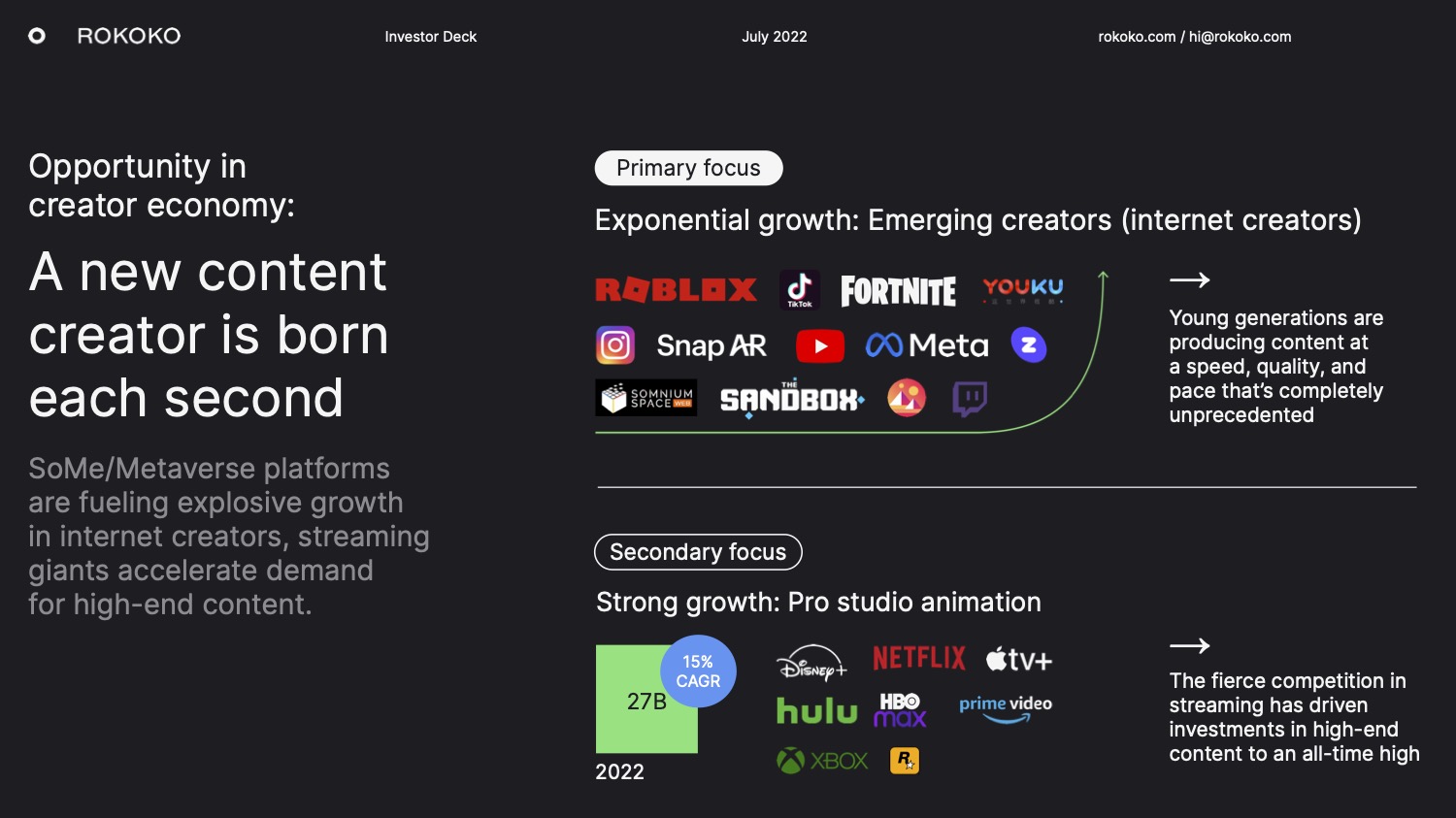 This slide tells such an important part of Rokoko’s story — Slide 4 covered the overall landscape, and here the company double-clicks on the creator economy; the additional context shows where amateur and low-end pro producers are putting their content. And it’s encouraging to see that the company has space to grow into more high-end content, too, produced by the likes of Disney+, Apple TV+, Hulu, HBO Max, Prime Video and Netflix. It shows the width and breadth of the customers who are using these services.

This round is all about bringing in an investor who already wants to be involved, so I’ll forgive Rokoko for this, but if this were a more general VC round, I’d invite them to talk more about what that “strong growth” looks like in numbers.

In the rest of this teardown, we’ll take a look at three things Rokoko could have improved or done differently, along with its full pitch deck!

TechCrunch wants to meet your startup at CES 2023

We’re a month out from the next CES. TechCrunch is...
Read more
Startups

A few years ago, I was driving in a rural area on the coast north of San Francisco and found myself low on...
Read more
Startups

Q&A: ‘Better Venture’ authors on why VC has failed to reinvent itself

The Everything Bubble: Markets At A Crossroads

Bitcoin Will Not Submit To Black Swans

This is an opinion editorial by Bernardo Filipe, a life-long thinker, philosopher and author of “The Straight Science.”“Earnings-free assets with no residual value are...
Read more
Trending

Despite a recent warning from European politicians on the dangers of bitcoin, the Swiss-based bitcoin app has published record results this month.Despite a recent...
Read more
Trending

On Tuesday, Brazil’s Chamber of Deputies approved a landmark cryptocurrency legislation that sets the tone for how the country will regulate bitcoin.Key aspects of...
Read more
Trending

No, Christine Lagarde, Inflation Did Not “Come From Nowhere”

This is an opinion editorial by Federico Rivi, an independent journalist and author of the Bitcoin Train newsletter.We are raising interest rates "because we...
Read more